Two thousand and thirteen, coming quickly to a close,

Events that have transpired, let us here expose.
Over Russia flew a meteor, over the Vatican white smoke,
Bombings up in Boston, the stateless Snowden bloke.
Poison gas in Syria, floods in India in June,
The governmental shutdown, in the Philippines typhoon.

A new tenant in the White House?  Alas we were not so lucky,
At least the current occupant, appears increasingly lame ducky.
Like in many a second term, scandals now abound,
The yes we can agenda, has now sadly run aground.
Worried about big brother? You might be right my love,
The NSA can hack anything, except healthcare.gov.

Who left us this past year?  We wish them all Godspeed,
Farewell to Edward Koch, farewell now to Lou Reed.
Global statesmen left us too, men and women of high stature,
Goodbye Nelson Mandela, goodbye to Margaret Thatcher.
James Gandolfini we will miss you, and your softer side of crime,
Adios to Hugo Chavez, your revolution ran out of time.

In the markets year to date, we’ve had lots of steady action,
Your choice of asset class, has shaped your degree of satisfaction.
US equities won the race, all year they kept on sprinting,
Boosted by juicy steroids, also known as money printing.
Gold and bonds were laggards, causing their owners mental anguish,
The Yen, Aussie, and Rupee, against the Dollar all did languish.

Among stocks there were big winners, that proved to be good picks,
The Facebook made a comeback, though not quite like Netflix.
Tesla hurt the shorts, cutting through them like a knife,
Other exhibits in that category, Green Mountain and Herbalife.
Losers have been scarce, in fact there are hardly any,
Blackberry and teen retail, and the flailing JC Penney.

And what about the macro, as we look out to fourteen?
Should we bet it all on bitcoin, to keep it in the green?
Across every class of asset, vol has disappeared like vapor,
The markets are complacent, worried not about the taper.
Remember you can’t go broke, with some profit taking,
Your smarts in this year’s rally, you should not be mistaking.

With those gains you can now harvest, let’s also do some giving,
There are still so very many, with a low standard of living.
Five years ago things were dismal, as the crisis was so dire,
Who imagined that so quickly, to new records we’d vault higher.
Be thankful this December, your health is just one reason,
Let’s think of those less fortunate, in this year’s holiday season.
Posted by CurAlea Associates LLC at 6:57 AM No comments:

Email ThisBlogThis!Share to TwitterShare to FacebookShare to Pinterest
Labels: Poetry by Pete

November saw wide dispersion in the performance of global risk assets, as developed market equities continued to rally, while most emerging market equities underperformed, the US dollar rallied, and commodity prices generally retreated.  A reasonably strong US jobs report led to continued anticipation of asset purchase tapering in the coming months by the Federal Reserve, which resulted in higher US interest rates for longer maturities.  Markets refocused on quantitative easing in Japan as the yen weakened and Japanese equity markets rose sharply.

Global risk assets rallied in October following a short term resolution of the US government shutdown and a delay in the enforcement of the US debt ceiling.  While the last minute Congressional agreement provides funding for US federal government agencies only through January 15 and allows the US government to continue borrowing only until February 7, global markets advanced on the avoidance of a US debt default and credit rating downgrade.  Continued central bank accommodation, including the October 30 Federal Reserve decision to continue its monthly $85 billion bond purchases, also provided a boost to global risk assets.


US Treasuries rallied slightly in October except at the very short end of the curve (see page 10), more than recovering the debt ceiling induced selloff in the first half of the month.  10 year rates closed the month at 2.55%, down slightly from 2.61% at September month end and down from the recent 9/6 intraday high of 3.00%.  Investment grade and high yield US credit spreads tightened in October to levels near YTD lows (see page 11).  European sovereign spreads also tightened in October, with Spain and Italy closing the month at the tightest levels since July 2011 (see page 12).

Number of Trading Days with Market Moves > 2% lowest since 2006. 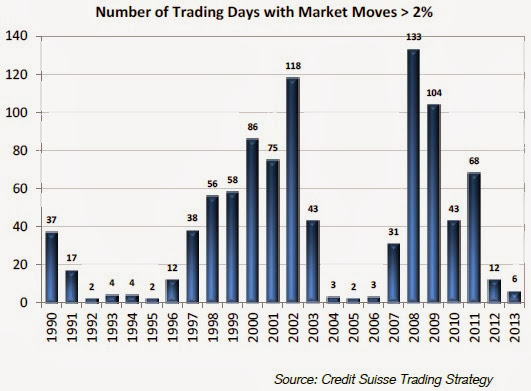 Posted by CurAlea Associates LLC at 12:13 PM No comments:

September brought renewed risk appetite to global markets despite the lack of progress in avoiding an October US government shutdown and debt default.  Markets were boosted by a pull back in US treasury yields, which accelerated following the surprise mid-month decision by the Federal Reserve not to taper its pace of asset purchases.  Stronger export and manufacturing data from China also provided support, particularly for emerging market and other risk currencies.

US Treasuries rallied in September most notably in the belly of the yield curve.  10 year rates closed the month at 2.61%, down from 2.78% at August month end and down from the 9/6 intraday high of 3.00%. Investment grade and high yield US credit spreads tightened in the first half of September, but widened in second half of the month to close roughly flat on the month.  European sovereign spreads tightened with the exception of Italy.

Posted by CurAlea Associates LLC at 11:06 AM No comments:

Email ThisBlogThis!Share to TwitterShare to FacebookShare to Pinterest
Labels: Poetry by Pete

Posted by CurAlea Associates LLC at 6:47 AM No comments:


August 2013 Monthly Commentary - Please contact CurAlea Associates for a Daily Market Review.
August was a month of heightened risk aversion within the context of the relative calm that has pervaded most global asset markets in 2013.  The combination of geopolitical tensions in Egypt and Syria, ongoing concerns over the tapering of the Federal Reserve’s asset purchases, the continued rise in US treasury interest rates, and the looming dual deadlines of a September US government shutdown and October debt default impacted global asset markets.
Almost all major developed market equity markets fell in August, led by a 3% fall in the S&P 500.  There was fairly large dispersion across US sectors, with the worst performing sectors down 5% (Financials and Utilities) and the best performing sector flat on the month (Materials).  The trend of large cap value outperforming growth since early 2012 reversed sharply in August.  While Emerging Market equities were roughly flat in local terms and down 1.7% in USD, there was very wide dispersion here as well with the biggest losses in Indonesia (-10%), Philippines (-9.4%), and Thailand (-8.7%) and the biggest gains in Argentina (+12.3%), Korea (+2.6%) and China (+2.4%).
In currencies, the USD Index was up 0.8% in August, with gains against all major developed market currencies except the British Pound, which strengthened by 2% versus the USD.  The dollar was also stronger against most emerging market currencies with the exception of the Korean Won, Taiwan Dollar, and Chinese Yuan; the weakest emerging market currencies were the Indian Rupee (-9.1% and consistently hitting new record lows versus the USD during August), Indonesian Rupiah (-9%), Turkish Lira (-5.1%), and Mexican Peso (-4.9%).
US Treasuries moved lower again in August, with continued yield curve steepening.  10 year rates closed the month at 2.78%, up from 2.58% at July month end, but down from the 8/21 intra month high of 2.89%.  Investment grade and high yield US credit spreads widened in August, while European sovereign spreads were largely unchanged with the exception of Portugal, which widened.
In commodities, the GSCI index closed up 3.4% in August, led by strength in Precious Metals (+7.9%), Energy (+4%), Livestock (+2.2%), Industrial Metals (+1.8%), and Agriculture (+0.4%).  Within individual commodities, Silver led gains (+19.5%), followed by Soybeans (+12.5%), Platinum (+6.8%), Gold (+6.3%) and Brent Crude (+5.8%); Coffee was the weakest performer (-4%), followed by Sugar (-3.7%), Wheat (-3.5%), Cotton (-2%), and Corn (-1.2%).
Posted by CurAlea Associates LLC at 7:10 AM No comments:

http://www.salientpartners.com/static/pdfs/RP%20Rates%20White%20Paper%20-%20FINAL.pdf
Posted by CurAlea Associates LLC at 5:51 AM No comments:

Very good study on the long term effects of Hedge Fund Activism. Refutes many of the criticisms.

Posted by CurAlea Associates LLC at 9:50 AM No comments: